The Golden Monkey (Cercopithecus mitis kind) is one of the twenty primate species found in Uganda, specifically Mgahinga Gorilla National park. Mgahinga is part of the massive Virunga Mountains, where the golden monkey is endemic. The golden monkey is a species of Old World monkey. It is widely spread in the Virunga volcanic mountains of Central Africa, including four national parks: Mgahinga, in south-west Uganda; Volcanoes, in north-west Rwanda; and Virunga and Kahuzi-Biéga, in the eastern Democratic Republic of Congo. It is restricted to the highland forest, especially near bamboo.

This species was previously thought to be a blue monkey subspecies (Cercopithecus mitis), and the two are similar overall. Still, the golden monkey has a golden-orange patch on the upper flanks and back. Not much is known about the golden monkey’s behavior. It lives in social groups of up to 30 individuals. Its diet consists mainly of bamboo, leaves, and fruit, though it is also thought to eat insects. Due to their habitat’s gradual destruction and recent wars in their limited habitat, the golden monkey is shown as endangered on the IUCN Red List.

We will process the park permits on your behalf from the Uganda Wildlife Authority (UWA).

Please carry a pack of N95 Facemask and hand sanitizer with you. You’ll be required to have a negative PCR COVID-19 test certificate issued within 72 hours of your arrival in the country, and keep your mask on when with animals and people crowds. You’re requested to adhere to COVID Operating procedures to keep you safe during your trip. 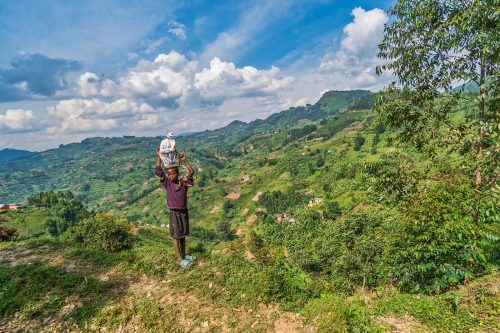 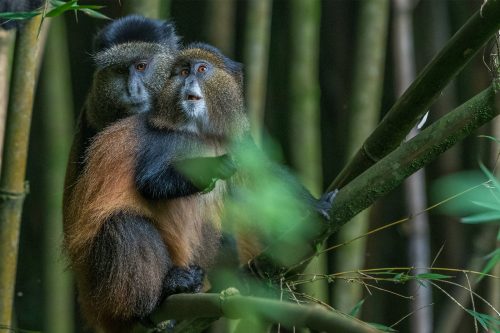 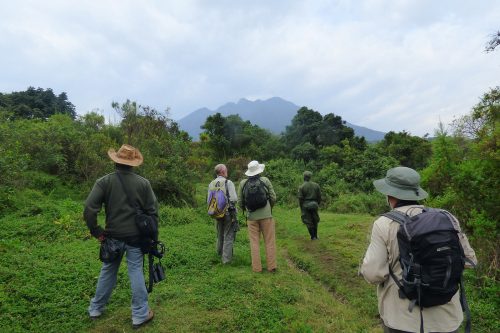 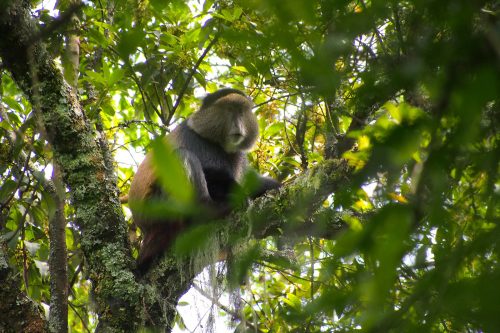 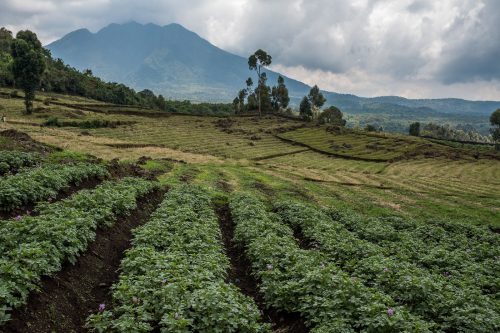 You can track golden monkeys in Mgahinga National Park or Volcanoes National Park, where you are escorted into the jungle and only allowed an hour in the presence of a habituated family. However, you can consider the golden monkey habituation experience in Mgahinga. The experience is more intense and rewarding than the trekking activity, and you spend close to 4 hours in their presence. The trek is not strenuous because golden monkeys are found at the mountain base in the Bamboo forest, a fairly flat terrain.

Some golden monkey troops in Mgahinga National Park have been habituated for tourism and are currently available for tourism though don’t get as much attention as the mountain gorillas and chimpanzee in Uganda.

The golden monkey tracking permit can be obtained from the UWA office or a licensed and trusted tour operator.

Explore your options, request for a quick quote

Please make sure you have your facemask on when in contact with animals, especially the endangered creatures. Without a negative PCR Covid Test, you’ll not be allowed into the country. You’ll spend most of your time in open spaces away from human crowds, with that there’s minimal to no infections of the COVID virus.

Your booking can be extended up to 12 months ahead with no extra fees, in case of any emergency (based on accommodation availability). Reservations are accepted after we receive a 30% deposit on the trip and the full payment for gorilla tracking and chimp tracking permits for each tour participant. For more details on our booking terms, please read our Terms and Conditions.

or send an email to info@nkuringowalkingsafaris.com

REQUEST A QUOTE
Open chat
1
Quick Chat!
Hello,
Chat is the quickest way to get answers to help you plan your Uganda safari. Start a conversation with one of our local experts at no cost without any commitment. Go on, start the conversation!